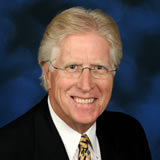 For more than 30 years, Ken Ritterspach has been a turnaround executive and consultant for companies experiencing financial crisis, leadership challenges, underperforming operations, and other significant organizational changes. His clients come from the manufacturing, distribution and service industries, as well as the public sector. A short list of clients includes: 3M, Johnson and Johnson, Toro, Citicorp, Jostens, Radisson, Pillsbury and Medtronic. Ken has overseen a wide range of negotiations, from the design of sales compensation programs and grassroots community initiatives to television production contracts and acquisitions and mergers.

Ken has been the president of five companies, had senior level positions in three others, and owned his own business. He has been a presenter for Franklin Covey, one of the world’s premier leadership and personal development companies. In the early 1970s, he was the Deputy Executive Director for Finance and Administration of the New York City Public Schools.

Ken was one of the early Peace Corps volunteers in Venezuela. He received his BA from Yale and MBA (Finance) and Ph.D. (Education) from Stanford.