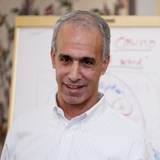 Rob is a Senior Consultant with CMPartners and the Director of the Institute of World Affairs at the University of Wisconsin, Milwaukee. He is also a former Executive Director of the Conflict Management Group and served as an Associate Director of the Harvard Negotiation Project at Harvard Law School.

At UWM, Rob teaches negotiation and international mediation and peacebuilding through the Communication Department. His recent work focuses on applying system thinking and complexity science to designing effective strategies for dealing with difficult problems and making sustainable societal and organizational change. Rob has worked with officials all over the world to help resolve conflict. Mr. Ricigliano has worked with political parties in the new Iraqi Parliament and has been involved in peacebuilding interventions in the Democratic Republic of Congo, Afghanistan, Russia, Georgia, Colombia, South Africa, and elsewhere. Mr. Ricigliano served on the first U.S. team ever to teach negotiation at the Soviet Foreign Ministry’s Diplomatic Academy in Moscow and has trained diplomats and other government officials from Africa, Europe, Asia, and North America. He was also selected by the Secretary of the Interior to lead a first of its kind mediation of a land dispute.

In a wide variety of corporate settings, Rob has done consulting, mediation, and training in negotiation, creating a value-based client relationship, and managing difficult conversations. He has worked with managers, executives, sales and marketing teams. Rob has also worked with families and smaller leadership groups to help improve how they work together and manage important issues. Mr. Ricigliano has mediated disputes with Canada’s largest private television network and a major healthcare system.