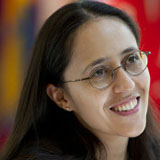 A PhD graduate from the Fletcher School of Law & Diplomacy and an MBA graduate from ESSEC Graduate School of Management in France, Tina Robiolle-Moul has worked for the past 15 years as a consultant, researcher, program manager, and lecturer, conducting research and capacity-building programs in Burundi, the Democratic Republic of Congo, Afghanistan, and France.

Since 2001, in association with ESSEC Institute for Research and Education on Negotiation (IRENE), Tina conducts negotiation, conflict management, and leadership seminars for diplomats and for graduate programs in France, including the French Public Administration School (ENA) and La Sorbonne University. In 2004, she began her work with the Burundi Leadership Training Program, a program initiated by the Africa Program of the Woodrow Wilson International Center for Scholars. In this capacity, she has facilitated peace-building programs for Government officials, U.N. military observers, leaders of political parties, High Command of the Army and the Police. Her last project to date in Burundi is a conflict resolution curriculum for the Ministry of Education targeting secondary schools. Interested in giving back to her native region, she also developed and implemented a capacity-building program dedicated to Afghan women parliamentarians whose objective is to strengthen and promote the political participation of women in Afghanistan with the support of Melanne Verveer, former Ambassador-at-Large for Global Women’s Issues near U.S. Secretary of State Hillary Clinton, and the French Ministry of Foreign Affairs. She is currently preparing the expansion of this program to all Afghan women senators and members of the High Peace Council.

Tina’s doctoral research assesses the influence of international standards and guidance on peace education on education policy and practice at the national and local levels in a fragile state. It also explores the critical factors that affect this influence—or the lack thereof. Utilizing a vertical case study approach that draws comparisons across multiple levels, her dissertation examines the case of Afghanistan from 2002 to 2015. It explores the origins and content of these recommendations at the global level, investigates their influence at the national level, and assesses what then should be implemented at the local level through the work of a local non-governmental organization (NGO). The issues, tensions, and concerns uncovered in this investigation contribute to providing guidance for how to improve the main-streaming of peace education in fragile states, and adds to the literature on school-based peacebuilding policy and practice in fragile contexts. This research is applicable to Afghanistan and to other fragile states and post-conflict countries that aim to reform or rebuild after a protracted war.