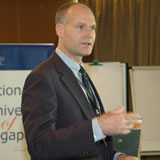 Tom Schaub is a Founder and Advisor of CMPartners, a leader in the field of interdependence management.

Mr. Schaub has served as adjunct faculty to the IBM Executive Consulting Institute, IMD Business School, The National University of Singapore’s Schools of Business and Lee Kuan Yew School of Public Policy, the American University in Beirut Business School, and still occasionally lectures at various Harvard graduate schools. He has also appeared on CNBC and NPR.

Mr. Schaub’s public practice centers on leadership capacity building, education, and direct strategic assistance. He has led projects with the World Bank, the Nile Basin Initiative, political parties in Kashmir, the Government of Brunei, the Bahrain Economic Development Board, the Nepalese Constitutional Assembly, the UN Special Envoy for Peace to Burundi, the Office of the President of Sri Lanka, the Organization of African Unity (OAU), the Foreign Ministry of the People’s Republic of China, the Dubai Institute for Human Resources Development, and the City of Minneapolis, among others. In addition to his work with CMPartners, Mr. Schaub is also a Founder and Board Member of A Public Good (APG), a non-profit dedicated to managing political and environmental conflicts worldwide.

Before forming CMPartners, Mr. Schaub worked as a Senior Consultant with Conflict Management Inc., and held both the Africa and Asia Directorships with the non-profit Conflict Management Group (CMG). Earlier, he worked in international relief and development with the UN, USAID and Catholic Relief Services (CRS) in Central and East Africa. During the Sudanese civil war, Mr. Schaub founded the Torit Forum, which coordinated field action among UN agencies, international relief organizations, local communities and the Sudanese People’s Liberation Army. Earlier in his career, Mr. Schaub served in the Federal General Services Administration in Washington, D.C., and as a U.S. Peace Corps Volunteer in The Democratic Republic of the Congo (then Zaire).

First as a Teaching Fellow and later as a colleague, Mr. Schaub worked extensively with Prof. Roger Fisher, Founder and Director of the Harvard Negotiation Project and co-author of Getting To Yes, Getting it DONE (Lateral Leadership), Beyond Machiavelli, and other seminal works in negotiation and relationship management. While assisting Prof. Fisher at Harvard, Mr. Schaub received the Danforth Award for teaching excellence. Mr. Schaub studied history, philosophy and biology at St. John’s University and the University of Minnesota and received his Masters in Public Policy from Harvard’s Kennedy School of Government.