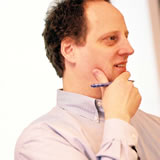 Doug is a Managing Partner at Triad Consulting Group, a Senior Consultant at CMPartners, LLC, and a Lecturer on Law at Harvard Law School, where he teaches negotiation. He consults to a wide range of organizations, including Fidelity, Honda, HP, IBM, Merck, Microsoft, Shell, the Nature Conservancy, and the Boston Area Rape Crisis Center.

Doug has also taught and mediated around the world. He has worked with mediators and journalists in South Africa, Greek and Turkish political and community leaders in Cyprus, doctors and executives at the World Health Organization, and diplomats at the former Organization of African Unity in Ethiopia.

Doug is co-author, along with Bruce Patton and Sheila Heen, of Difficult Conversations: How to Discuss What Matters Most (Penguin, 2000), a New York Times Business Bestseller. His articles on negotiation and conflict resolution have appeared in the New York Times, the Los Angeles Times, the Boston Globe, Management Consultant News, and IT Metrics, as well as in magazines like Parents and Real Simple. He has appeared on many TV and radio shows, including Oprah, and was a key-note speaker at the 2006 World Negotiation Forum in Brazil.

From 1988 to 1998, in addition to his teaching and consulting, Doug was an Associate and then Associate Director of the Harvard Negotiation Project, where he worked with Roger Fisher and other colleagues on advanced negotiation applications and on the development of negotiation theory.

Doug graduated from Brown in 1980 and Harvard Law School in 1984. Prior to returning to Harvard, he practiced transactional and regulatory banking law at firms in Boston and New York.