3 Steps to Changing the Negotiation Game for DACA 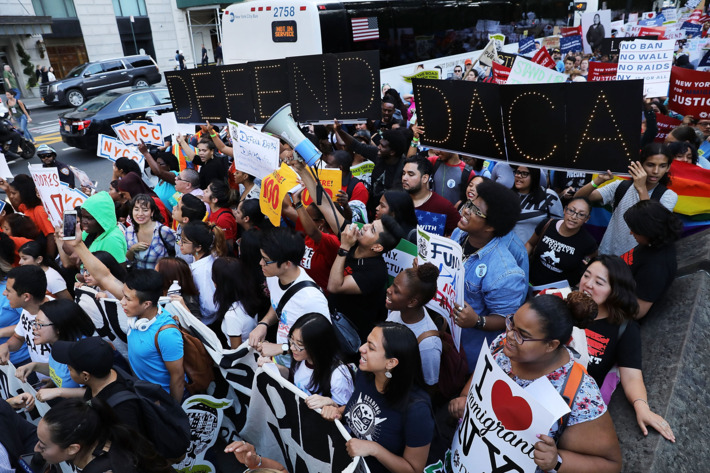 Reframing from a win/lose proposition between Democrats and Republicans to a winning solution for our economy, our residents, and our democracy.

October 5 was the last day for DACA recipients to register for a two-year renewal of their protected immigration status. In light of President Trump’s announcement to discontinue the program less than six months from now, thousands of immigrants are now facing a terrifying uncertainty, waiting to see whether they’ll be deported to ‘home’ countries they barely know.

On October 8, the White House delivered to Congress a set of immigration measures designed to leverage the Dreamers’ vulnerable status to coerce Congress into legislative action.

The ball is now in Congress’s court, and it may be tempting for Democrats to reject the president’s request to deny him a legislative win. Such a loaded question deserves to be framed through a negotiation lens. Here’s how we’d frame it:

Should our elected officials play the win/lose game the President has chosen by stalling legislation and denying him a legislative win?

The answer is no, members should not play the president’s game, and instead aim to change it. President Trump is using DACA to strong-arm Congress and the process, using DACA recipients as a bargaining chip. Like many hard bargainers before him, the President is creating a game that defines losers and winners. When we refer to “naming and changing” the game in a negotiation context, we mean:

1)   Calling out the game-like move that you observe;

2)   Describing the consequences of continuing that game; and

3)   Leading with and committing to a different process going forward.

So let’s dive deeper. What do we even mean by a “game?”

Here’s the dangerous game the President is playing:

The president sees DACA as a means to negotiate with Congress about who can and should make laws. With no significant legislative accomplishments under his belt, the president needs a win, and instead of pushing for bipartisan cooperation, he is using the only form of negotiation he knows: hard tactics aimed at strong-arming his counterparts.

By expressing opposition to the way DACA was created (despite supporting executive privilege in other areas), he justifies dismantling it. And by setting a six month deadline on DACA to ostensibly leave time for a legislative solution, he puts DACA-supporting members in a bind: either they support a legislative option and give the president credit for “making Congress work,” or they stall legislation and jeopardize the status – and lives – of Dreamers.

Our Representatives and Senators realize that the president’s actions bait them to call his bluff. And they realize that if they play the game he has laid out, the next move would be to block legislation to see if the president will flinch and let DACA expire. This sets a scary precedent.

DESCRIBE THE CONSEQUENCES OF THE GAME

While it is tempting to send President Trump the message that he can’t strong-arm Congress, it is so important for Congress to not play this game, as the costs are much greater than the benefits. Calling the president’s bluff is dangerous for three reasons:

LEAD WITH A DIFFERENT PROCESS

Instead, Congress – and constituents – need to take control of the process: call out the president for threatening 800,000 Dreamers for his own political gains rather than advocating for any actual policy change. Do not call his bluff and stall legislation. Rather:

Change the conditions, and then urge Congress to pass legislation. Changing this game will allow you to highlight the interests congressional members and the wider public share with the president. Presumably, we all want to:

Actual people can create the conditions that allow Congress to highlight such shared interests and it’s up to them (by which we mean all of us) to hold our congressional representatives accountable. The only ‘winners’ of this game should be our economy, our residents, and our democracy.